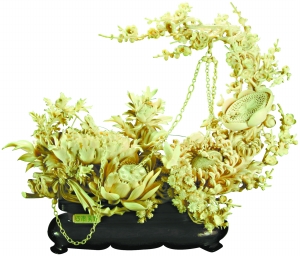 The core hints that the traditional industrial beauty in Yunnan can reach 10 billion yuan this year. It is expected that breakthroughs will be achieved from the key links such as improving the overall quality of employees in the industry, issuing industry standards, and promoting the â€œthreeâ€ project.

In recent years, the development of the industrial and engineering industry in the province has grown by leaps and bounds. This year is also a crucial year for the construction of a strong country with a strong socialist culture and the building of a strong national culture. Zhang Huazhong, president of the Provincial Arts & Crafts Industry Association, believes that traditional Chinese workers in the United States can expect 10 billion yuan in output value this year. However, to seize the opportunity to play the game well in the province, it is necessary to improve the overall quality of employees in the industry and introduce industry standards. Standard management, promotion of "three" project and other key links to break through.

The speed of development of Yunnan Gongmei ahead Western reporter learned from the Provincial Arts and Crafts Industry Association that the growth rate of the Yunnan Gongmei industry exceeded the average speed of the western region last year, and even caught up with developed regions like Hunan and Hubei in terms of development speed. Regardless of the historical aspect or the aspect ratio of the same period, the development of Yunnan's arts and crafts is good and fast.

Zhang Huanzhong said that the development of Yunnan's arts and crafts can be said to be thriving. The economic structure of the entire industry has already undergone a positive reversal. In 2007, the provinceâ€™s industrial companies in the U.S. were roughly â€œ5% profitable, 35% profitable, and 55% lossâ€. In 2011, the U.S. industry companies in the U.S. were reverted to â€œ5% loss, 35% profit, 55% profitâ€. "The economic structure. From this change, it can be seen that the development path of the Yunnan arts and crafts industry in recent years is correct, and the situation facing the industry enterprises and practitioners is getting better and better.

According to Zhang Huanzhong, the development prospects of the Yunnan Gongmei industry this year will be even better than last year. The first is the outbreak of the construction of a â€œCultural Powerâ€ at the Sixth Plenary Session of the 17th CPC Central Committee. The intensity of cultural construction in our province will be further enhanced. Next is the sustained and healthy development of the country's economy. The people live and work in peace and contentment. In the coming period, the market's consumer demand for arts and crafts will continue to increase. All of these are conducive to Yunnan Gongmei achieving its 10 billion output value target.

Working Together to Improve the Quality of Practitioners The development opportunities and prospects faced by the Yunnan Gongmei industry are excellent. However, the generally low overall quality of employees has become a prominent issue that has hindered the development of the industry. More than 5% of the employees of colleges and universities in the arts and crafts industry in Yunnan are less than 5%, 30% of those in high school and secondary school, and 65% of those in the junior high school.

Zhang Huazhong analyzed that the cultural quality of the industry practitioners is low, resulting in lagging behind in the artistic and cultural arts. The concentrated performance in philosophy, design, packaging, and marketing lags behind. This has become a prominent issue affecting and constraining Yunnan Gongmeiâ€™s striding forward. . In the cultural industry, especially in the arts and crafts industry, the development characteristics of â€œpeople-orientedâ€ are very obvious. If there are not enough high-quality employees, especially a group of masters, teachers, and craftsmen who are influential and well-known, then the development of this industry Will lack support.

This year, the Provincial Arts and Crafts Industry Association will intensify its efforts in training, and the Association will work with renowned universities in the province to enhance the quality of practitioners. Through the establishment of regional centralized correspondence points in Kunming, Longnan, and Longxi, correspondence and training in theory and practice will be carried out among the workers in the various regions of the province. At present, it has been determined that we will cut into the plastics arts specialty, and on the basis of obtaining government support, we will conduct short-term training on workers in the U.S. industry in batches and grades, and pay attention to effectiveness to enhance the overall quality.

The introduction of industry standards and the lack of industry standards in the management of business order are another major issue faced by Yunnan Gongmei Development. This year, the Provincial Arts and Crafts Industry Association will intensify efforts for government support and strive to formulate the industrial standards for Yunnan's industrial beauty as soon as possible.

According to Zhang Huanzhong, the province's industrial beauty industry involves 21 categories. Objectively, there are many workshops and small enterprises, each of which is in a state of being single and single. Lack of standardized industry standards will make it difficult to form a scale of operations. This will also lead to the occurrence of irregular operations such as shoddy and fraudulent use in the industrial and commercial industries. With Jianshui violet pottery, which has been developing rapidly in recent years, it is now evident that there are problems such as the unorthodox operation of hand-made pottery and mechanized pottery on the market, and the use of master pottery by other people as being untrue. Like these issues, in addition to the self-regulation of the operators, it is particularly necessary to strengthen the specification through the introduction of industry standards.

At present, the three sections of Jianshui Purple Pottery, Silverware and Woodcarving will be considered first to formulate and issue industry standards. In addition to cooperating with colleges and universities to raise the quality of practitioners and introduce industry standards and standardize the business order, the promotion of the â€œthreeâ€ project is to cultivate well-known brands, well-known shops, and well-known masters. This yearâ€™s Yunnan traditional industrial beauty rushes 10 billion yuan in output value. Important work. Chief reporter Xiao Yuhui reported photography.

personalised cufflinks are items of jewelry that are used to secure the cuffs of dress shirts. Custom Cufflinks can be manufactured from a variety of different metal materials, such as zinc alloy and brass, precious metal or combinations of these. Securing of the cufflinks is usually achieved via toggles or reverses based on the design of the front section, which can be folded into position. There are also variants with chains or a rigid, bent rear section. The front sections of the cufflinks can be decorated with gemstones, inlays, inset material or enamel and designed in two or three-dimensional form.
Custom Cufflinks are designed only for use with shirts which have cuffs with buttonholes on both sides but no buttons.